Recently, a co-authored open-access journal paper was published at IEEE Access, sponsored by the IEEE Computer Society. The paper is entitled “Background-aware colourisation technique for Augmented Reality applications” and presents a background-aware colourisation technique to automatically select colours of virtual objects by using three different strategies according to the use case scenarios.

In particular, the strategies automatically change the colours of augmented objects in an AR scenario by taking into consideration the colours of the real background. The proposed AR colourisation technique was assessed with a user study that focused on three different case studies. Interesting results were also obtained, showing the potential of the proposed technique.

Northwestern University researchers have invented a new high-resolution camera that can see the unseen, including around corners and through scattering media, such as skin, fog or potentially even the human skull. Called synthetic wavelength holography, the new method works by indirectly scattering coherent light onto hidden objects, which then scatters again and travels back to a camera.  From there, an algorithm reconstructs the scattered light signal to reveal the hidden objects. Due to its high temporal resolution, the method also has potential to image fast-moving objects, such as the beating heart through the chest or speeding cars around a street corner.

The relatively new research field of imaging objects behind occlusions or scattering media is called non-line-of-sight (NLoS) imaging. Compared to related NLoS imaging technologies, the Northwestern method can rapidly capture full-field images of large areas with submillimeter precision. With this level of resolution, the computational camera could potentially image through the skin to see even the tiniest capillaries at work. While the method has obvious potential for noninvasive medical imaging, early-warning navigation systems for automobiles and industrial inspection in tightly confined spaces, the researchers believe potential applications are endless.

Nreal is one of the few companies still standing from the early wave of augmented reality glasses makers. And today it is unveiling the second-generation Nreal Air glasses with big improvements. The goal of the Beijing-based company is to keep moving fast on the leading edge of the technology and create multiple generations of products so that it can be ready with the right one when the AR market takes off. The company is pitching the device as a portable movie theater. 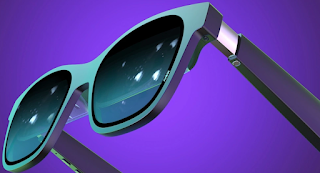 The newest glasses weigh just 2.7 ounces (77 grams), and they’re smaller and more compact than the Nreal Light glasses (100 grams) that the company launched in 2019. Advancements in AR technology have accelerated exponentially since Nreal Light was first unveiled. And that makes smaller and more compact augmented reality technology available. The company has also designed the new glasses for specific applications, such as streaming TV shows and playing mobile games.