On the 10th of December 2015, I gave an invited lecture at the Faculty of Philosophy, Masaryk University, entitled ‘The use immersive technologies for interdisciplinary research’. 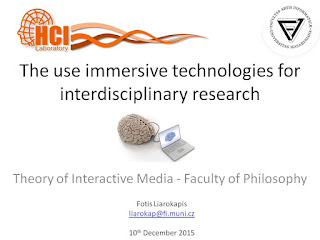 How the Brain Finds Its Way

Development of an innate ability to know where we are in relation to our surroundings stands as a major triumph of evolution. Scientific American, describes both the discovery of the brain’s internal navigation system and its inner workings. 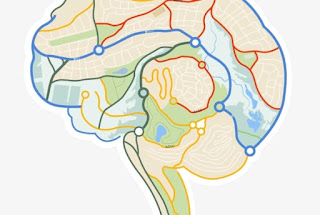 This system, which encompasses complex interactions of place, grid, border, speed and head-direction cells, provides a fascinating glimpse into the intricate symphonic collaboration of neural circuitry that produces a cognitive map of the world around us.

The University of Utah is this year’s winner in the ‘Best Student Developed Serious Game’ category of the Serious Games Showcase & Challenge with Healthx, a game to help treat and diagnose lazy eye in children. Working with researchers at the John A. Moran Eye Center, a team from the U created Healthx to help diagnose and treat lazy eye, which can lead to permanent visual impairment if left untreated. Fully controlled by eye movement, the Serious Game forces the lazy eye to move around the screen, which can strengthen and help find the right balance between the eyes. The game’s proposition is to train the weak muscles responsible for amblyopia or ‘lazy eye’, by using hardware that tracks player’s eye movement and adding a gameplay element to traditional eye exercises.

In talking with their network of eye care professionals, developers learned that current techniques of eye strengthening are boring and compliance, especially among children, is very low. Lazy eye is one of the most common eye disorders found in children. Despite its prevalence, clinical treatments and current diagnostic tools are not designed with the child’s nature in mind. Solution provides an engaging experience, continuous feedback and a cost effective, automated tool for treating and diagnosing lazy eye. Healthx is a collection of eye controlled games including a top down shooter that requires fast target acquisition and a slower paced balloon popping game. Both games require the player to constantly move their eyes across the screen at varied time intervals.

Scientists from Imperial College London have identified for the first time two clusters of genes linked to human intelligence. Called M1 and M3, these so-called gene networks appear to influence cognitive function - which includes memory, attention, processing speed and reasoning. The scientists have discovered that these two networks - which each contain hundreds of genes - are likely to be under the control of master regulator switches. The researchers are now keen to identify these switches and explore whether it might be feasible to manipulate them. The research is at a very early stage, but the scientists would ultimately like to investigate whether it is possible to use this knowledge of gene networks to boost cognitive function. 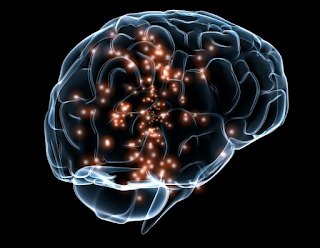 In the study, the international team of researchers looked at samples of human brain from patients who had undergone neurosurgery for epilepsy. The investigators analysed thousands of genes expressed in the human brain, and then combined these results with genetic information from healthy people who had undergone IQ tests and from people with neurological disorders such as autism spectrum disorder and intellectual disability. They conducted various computational analyses and comparisons in order to identify the gene networks influencing healthy human cognitive abilities. Remarkably, they found that some of the same genes that influence human intelligence in healthy people were also the same genes that cause impaired cognitive ability and epilepsy when mutated.

For once, having socks full of urine and bacteria is a good thing. A pair of sock-like generators, designed by robotics researchers at the University of the West of England in Bristol, U.K., are able to turn human waste and locomotion into electrical power with a bit of help from microbes. According to them, this is the first time anyone has combined microbial fuel cells with wearable technology. Indeed, the socks produced enough electricity to power a specialized wireless transmitter sending out the message “World’s First Wearable MFC” every two minutes. The crux of the idea was to create a self-contained system for generating power, with an eye toward survivalist scenarios. Using microbial fuel cells to generate electricity is nothing new. 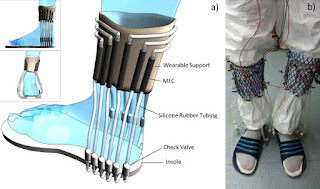 In these previous iterations, however, an external power source was needed to power pumps to move the urine around and keep the microbes fed. The idea for the foot power was not, alas, inspired by Flintstones reruns but by the simplified circulatory system of fish, which is a single closed circuit powered by the simple pumping motion of the heart. Instead of muscular contractions, the sock uses the squeezing power of the human heel to drive the urine around so that it passes through 24 (24!) discrete, flexible MFCs positioned at different points around the sock. Just as a fish’s muscles need their blood supply kept circulating to keep a fresh supply of oxygen available, the microbes in the MFCs need their urine bath constantly exchanged to ensure a steady supply of nutrients.