Last month, I presented an article with title ‘A Mobile Framework for Tourist Guides’ to the workshop on Virtual Museums, which was held in conjunction with the VAST 2007 conference. This article, presents how the LOCUS multimodal mobile framework can be used for tourist guides which can be any open-air heritage exhibition. The main objective of the multimodal heritage system is to provide advanced LBS to mobile users delivered through a web-browser interface. The mobile system allows tourists to switch between three different presentation guides including map, virtual and augmented reality. Localisation of the visitors is established based on position and orientation sensors which are integrated on light-weight handheld devices. To illustrate some of the capabilities of the mobile guide two case-studies were presented: one for the national Swiss park while the second was developed for City University. 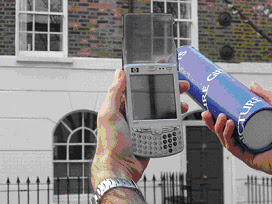 Using the City University mobile guide, pedestrians can navigate intuitively within the real environment using both position and orientation information on a mobile virtual environment. Additional functionality such as dynamic switching of camera viewpoint from the pedestrian view to a birds-eye view can be accessed from the menu buttons. Another important aspect of the guide is that the digital compass can be also used as a virtual pointer to provide useful information about the surroundings such as ‘what is the name of the building?’ or ‘how far it is located from me?’ etc. Routing tools are developed to provide advanced navigational assistance to mobile users based upon the experience of previous users, and so may suggest different routes depending on whether the journey is to be taken.

A draft version of the paper can be downloaded from here.
Labels: Archaeology, Articles, LBS

South Korean display screen maker Samsung SDI announced on Thursday it had developed a 31-inch ultra-thin organic screen, raising the stakes in an accelerating worldwide race for organic displays. Samsung SDI's announcement comes after Sony Corp began sales of 11-inch OLED TVs in November which has showcased a 27-inch prototype OLED TV in the past. Flat screen makers are increasingly looking at active-matrix organic light-emitting diode (AM-OLED) as a growth driver because they produce brighter images and use less power. Samsung SDI declined to say when the company's 31-inch OLED screen would be mass-produced. Samsung SDI is also planning to mass-produce 14-inch screens in 2008. Samsung SDI said its 31-inch module is only 4.3 mm thick, or one-tenth of a typical liquid crystal display panel, and consumed less than half the electricity needed for a 32-inch LCD screen. Samsung SDI also said the lifespan of its display was 35,000 hours, the best performance among existing AM-OLEDs. While small AM-OLED displays are already in use on premium mobile phones and media players, large-sized models are particularly difficult and costly to make. Shipments of Sony's 11-inch OLED TVs have been limited to 2,000 units per month.

The Russian Space Agency (Roskosmos) announced the successful launch of three new GLONASS-M satellites on Friday 26th October. The satellites were fired into orbit atop a Proton booster from Baikonur. This launch represents the first tangible developments from the government’s 9.88 billion rubles (£190 million) investment in the system in 2007 and puts the Russians on track to have the constellation fully operable again by 2009. The Global Navigation Satellite System (GLONASS) is based on a constellation of active satellites which continuously transmit coded signals in two frequency bands, which can be received by users anywhere on the Earth's surface to identify their position and velocity in real time based on ranging measurements. The system is a counterpart to the United States Global Positioning System (GPS) and both systems share the same principles in the data transmission and positioning methods. GLONASS is managed for the Russian Federation Government by the Russian Space Forces and the system is operated by the Coordination Scientific Information Center (KNITs) of the Ministry of Defense of the Russian Federation. 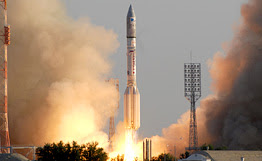 The operational space segment of GLONASS consists of 21 satellites in 3 orbital planes, with 3 on-orbit spares. The three orbital planes are separated 120 degrees, and the satellites within the same orbit plane by 45 degrees. Each satellite operates in circular 19,100 km orbits at an inclination angle of 64.8 degrees and each satellite completes an orbit in approximately 11 hours 15 minutes. The ground control segment of GLONASS is entirely located within former Soviet Union territory. The Ground Control Center and Time Standards is located in Moscow and the telemetry and tracking stations are in St. Petersburg, Ternopol, Eniseisk, Komsomolsk-na-Amure. The first GLONASS satellites were launched into orbit in 1982. Two Etalon geodetic satellites were also flown in the 19,100 km GLONASS orbit to fully characterize the gravitational field at the planned altitude and inclination. The original plans called for a complete operational system by 1991, but the deployment of the full constellation of satellites was not completed until late 1995 / early 1996. GLONASS was officially declared operational on September 24, 1993 by a decree of the President of the Russian Federation.

Imagine playing a flight simulation video game that lets you guide the aircraft with your hands alone. Or think about sparring with a virtual boxing opponent by doing nothing but standing up and throwing punches in the air. A company called 3DV Systems produced a 3D camera that plugs directly into a PC, is designed to let gamers' hands be the only controllers they need. The ZCam works by emitting short infrared pulses and then measuring the reflections off objects. Sophisticated software algorithms interpret those reflections in such a way that the system can judge the distance of--and distinguish between--various objects and, say, discern someone's hands. Because it relies strictly on the reflection of the light from the camera, it doesn't need ambient light to work, allowing ZCam to function in a dark room, or with any kind of background, bright, dark or otherwise. 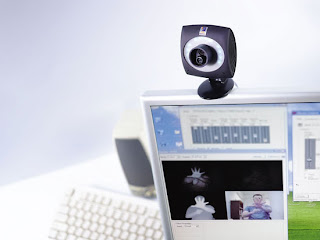 The software can key in on a gamer's hands, and even between his or her fingers, and can run various applications based on what that person does with their head, hands, fingers, or torso. The technology has applications beyond video games, as well, particularly because it has some ability to be autonomously applied to existing software. But while 3DV Systems has clients in many different fields, including the military, its focus for now is on video games and how the ZCam technology could make a dent in the traditional interface market. The company doesn't intend to put ZCam itself on the market as a consumer product. Rather, it intends to license the technology to others, potentially a console maker such as Microsoft, Sony, or Nintendo, or to PC game developers.

The Future of Virtual Surgeries

Video games that simulate the experiences of combat, space travel and car theft have achieved a startling level of fluidity and detail in recent years to create increasingly realistic virtual worlds. When it comes to medicine, however, the graphics that doctors and surgeons have to work with are closer to the grainy, cartoonish images of the Atari generation than they are to the video games Assassin's Creed or Grand Theft Auto. The computing power required to render virtually realistic organs and soft tissue is still unavailable to most physicians (except for a handful with access to supercomputers), but it's coming soon. 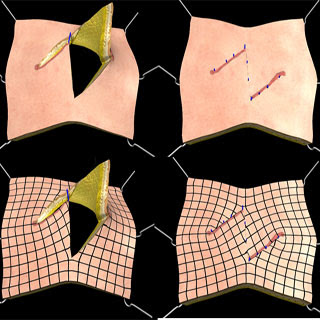 Within the next five years when medical professionals will be able to scan patients prior to procedures and create three-dimensional virtual images of their bodies, which they can store in computers and use for practice before performing the real surgeries. Tissue, muscle and skin are elastic and behave like a spring, and their characteristics can be expressed using classical mathematical theory. To develop virtual models of patients, physicians must create geometric representations of their tissue and organs using either magnetic resonance imaging (MRI) or computed tomography (CT). The information that these scanners currently provide, however, is in the form of numbers representing shades of gray, which are insufficient for creating accurate, real-color, three-dimensional renderings.

A few months ago, I have ported MRGIS into VAIO UX Handheld PC which is an Ultra Mobile PC (UMPC). Similarly to the laptop version, three visualization domains are supported including: virtual reality, augmented reality and mixed reality in order to get the best possible representation for visual exploration. On each domain, four different types of geovisualisation and navigation aids can be superimposed such as geo-referenced 3D maps, 2D digital maps, spatial 3D sound and 3D/2D textual annotations. 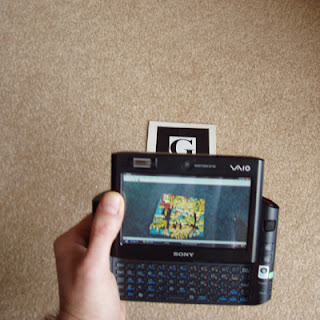 In the above example, a three-dimensional map of City University campus is superimposed onto a marker card using the augmented reality domain. Interactions can be performed using the mouse or the keyboard of the UMPC, the MRGIS user-centered graphical user-interface or by natural ways (by manipulating the card). However, the greatest advantage of the handheld mixed reality system is that it can be used in outdoor environments much more effectively than third-generation mobile phones and personal digital assistants (PDAs).
Labels: Augmented Reality, Mixed Reality, Mobile, Navigation, Visualisation
Newer Posts Older Posts Home
Subscribe to: Posts (Atom)