How Your Brain Learns Physics

Researchers scanned the brains of nine advanced physics and engineering students as they thought through 30 physics concepts such as momentum, entropy and electric current. The researchers fed the data from the scans into a machine-learning computer program, which eventually could identify which concept a volunteer was thinking about based on his or her brain activity. To take it further, the scientists then compared the scans from their study with previous research matching neural activity to thought processes. 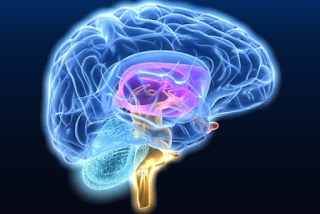 They found that brain responses corresponding to the scientific concepts of frequency or wavelength occurred in the same regions that activate when people watch dancers, listen to music or hear rhythmic patterns such as a horse's gallop. And when the students thought through mathematical equations, the engaged brain areas were the same as those that process sentences. These results suggest that general neural structures are repurposed for dealing with high-level science. The findings may someday help determine which school lessons should be taught together for easiest consumption.

On the 29th of June 2016, my PhD student, Philip Skola gave a talk to Session 4: Character Animation & Rendering which was part of the 33rd Annual Conference on Computer Graphics International (CGI 2016), Hersonissos, Crete, Greece. 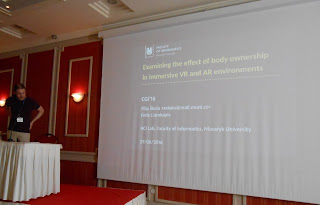 The title of his talk was 'Examining the Effect of Body Ownership in Immersive Virtual and Augmented Reality Environments' and the paper was published to a special issue in Visual Computer, Springer.

With the success of Pokemon Go, which has reached 150M DAU in the past week alone, we’ve seen what great IP and a clever mobile experience can be at scale. A simple realtime map, millions of POIs, and just enough AR… has become a worldwide hit in single digit days. What’s amazing is that all of this has happened with just the phones in our pockets. No need for the AR/VR headsets and glasses that so many startups are working feverishly to build and sell. 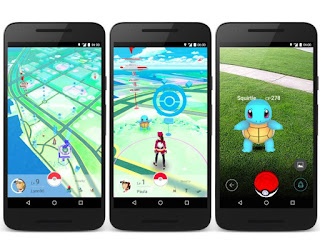 The best technologies are not measured by their specs, but instead the experiences they enable. This is a great reminder that a simple novel product experience is entirely sufficient to engage millions of people. A new high bar has been set for everyone working on the next killer app for AR/VR. While maybe daunting, I’m even more excited about the future. The next wave of products we all use… will be even that much more amazing.

Women are as Good as Men at Videogames

Although women now make up almost half of all video game players, the gaming community remains, in some ways, hostile toward women. For example, the GamerGate controversy, which began in 2014 and involved a harassment campaign against prominent female gamers, journalists and designers, reflected a longstanding undercurrent of misogyny and sexism in the community. In some cases, those who challenged the sexism found themselves threatened with rape or death. There’s also the long-held stereotype that men are simply better gamers than women. Women gamers are often perceived as incompetent players who aren’t genuinely interested in the games but rather sign up to get attention. If a female gamer does play well, she’s often derided as a hacker – someone who cheats to gain an advantage – because there is no way a girl can be that good. 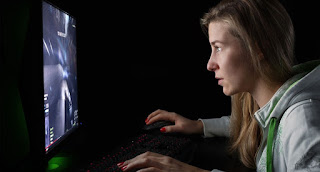 In a recent study, we set out to examine whether men really make better gamers than women and, if so, what drove the gender performance gap. Specifically, we wanted to compare how quickly men and women leveled up in Massively Multiplayer Online (MMO) games, which are online worlds where thousands of players develop characters, make friends, join groups, complete quests and slay dragons together. If men are actually better gamers than women, they should advance to higher levels within the same amount of play time. But if they don’t progress any faster, this finding would help refute one of the most pervasive stereotypes that continue to exist in the gaming community. The  research used anonymous server data from over 10,000 men and women in two MMOs. Results found that women advanced at least as fast as men did.

On the 28th of June 2016, I gave an invited talk to the tutorial 'Capturing, Rendering & Animation in Cultural Heritage' which held in conjunction with the 33rd Annual Conference on Computer Graphics International, Hersonissos, Crete, Greece. 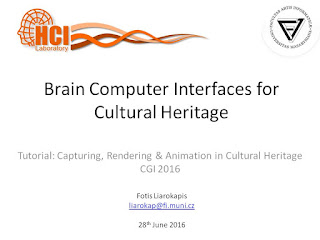 The title of my talk was 'Brain Computer Interfaces for Cultural Heritage'. I have presented different techniques for brain computer interfaces for understanding, navigating and interacting with cultural heritage applications.

A Force Field Around Our Bodies And You Can Feel It

Our personal space guides our hands when we reach out, causes us to duck when objects hurtle towards us and makes us acutely aware of the world around us. And now, for the first time, scientists have found a way to help us feel it. Researchers at the Karolinska Institute in Stockholm have tweaked a well-known experiment called the rubber hand illusion for a study published in the journal Cognition. In the classic version, participants are shown a fake rubber hand while their own hand is hidden behind a screen. After a few minutes of simultaneous stroking of both the real and fake hands, the person’s brain starts to believe that the fake hand is actually their own. 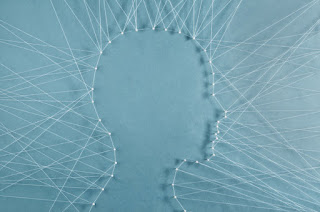 In the new study, which involved 101 adults, scientists repeated the test but applied brushstrokes in mid-air above the fake hand, rather than touching it. As in the classic experiment, participants start to believe that the fake hand is their own. But in this version, they also started to sense what feels like a force field between the brush and the rubber hand. According to the study, the sensation continues as far as 15 inches above the rubber hand, which indicates the size of what scientists of our peripersonal space. The space around the body is processed like a jello mold. Like a thick layer of space around the body, deforming and moving as the limbs move.