First 3D Map of the Universe

An international team of scientists have used Hubble telescope to reconstruct the first ever three-dimensional map at the web-like large-scale distribution of dark matter in the Universe in unprecedented detail. This is one of the most significant achievements in cosmology, which confirms standard theories of structure formation. The 3D map is comparable to visualising a city, its suburbs and surrounding country roads in daylight for the first time. Additionally, major arteries and intersections are exposed and the variety of different neighbourhoods becomes apparent. 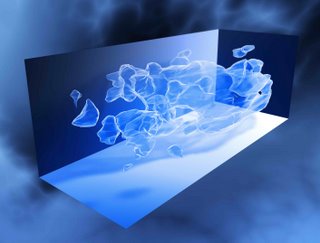 The map was reconstructed based on the largest survey of the Universe made by the Hubble Space Telescope, the Cosmic Evolution Survey (COSMOS), carried out by an international team of 70 astronomers. To add 3D distance information, the Hubble observations were combined with spectra from ESO’s VLT (Very Large Telescope) and multicolour images from the Japanese Subaru and Canada-France-Hawaii telescopes. The 3D map, obtained thanks to HST and XMM-Newton data, reveals a loose network of dark matter filaments, gradually collapsing under the relentless pull of gravity, and growing clumpier over time. The three axes of the box correspond to sky position and distance from the Earth increasing from left to right.