Researchers have successfully reconstructed 3D hand motions from brain signals recorded in a non-invasive way. This finding uses a technique that may open new doors for portable brain-computer interface systems. Such a non-invasive system could potentially operate a robotic arm or motorized wheelchair -- a huge advance for people with disabilities or paralysis. Until now, to reconstruct hand motions, researchers have used non-portable and invasive methods that place sensors inside the brain. In this research, a team of neuroscientists of the University of Maryland, College Park, placed an array of sensors on the scalps of five participants to record their brains' electrical activity, using a process called electroencephalography, or EEG. Volunteers were asked to reach from a center button and touch eight other buttons in random order 10 times, while the authors recorded their brain signals and hand motions. Afterward, the researchers attempted to decode the signals and reconstruct the 3D hand movements. Results showed that electrical brain activity acquired from the scalp surface carries enough information to reconstruct continuous, unconstrained hand movements. 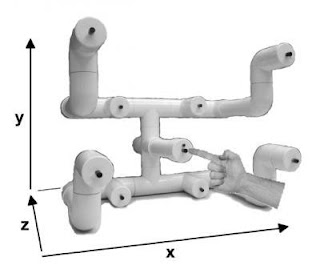 The researchers found that one sensor in particular (of the 34 used) provided the most accurate information. The sensor was located over a part of the brain called the primary sensorimotor cortex, a region associated with voluntary movement. Useful signals were also recorded from another region called the inferior parietal lobule, which is known to help guide limb movement. The authors used these findings to confirm the validity of their methods. This study has implications for future brain-computer interface technologies and for those already in existence. It may eventually be possible for people with severe neuromuscular disorders, such as amyotrophic lateral sclerosis (ALS), stroke, or spinal cord injury, to regain control of complex tasks without needing to have electrodes implanted in their brains. The findings could also help improve existing EEG-based systems designed to allow movement-impaired people to control a computer cursor with just their thoughts. These systems now require that users undergo extensive training sessions.