Next Cameras Come Into View

Scientists at Duke University have built an experimental camera that allows the user—after a photo is taken—to zoom in on portions of the image in extraordinary detail, a development that could fundamentally alter the way images are captured and viewed. The new camera collects more than 30 times as much picture data as today's best consumer digital devices. While existing cameras can take photographs that have pixel counts in the tens of millions, the Duke device produces a still or video image with a billion pixels—five times as much detail as can be seen by a person with 20/20 vision. A pixel is one of the many tiny areas of illumination on a display screen from which an image is composed. The more pixels, the more detailed the image. The Duke device, called Aware-2, is a long way from being a product. 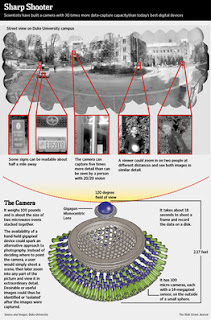 The current version needs lots of space to house and cool its electronic boards; it weighs 100 pounds and is about the size of two stacked microwave ovens. It also takes about 18 seconds to shoot a frame and record the data on a disk. The $25 million project is funded by the Defense Advanced Research Projects Agency, part of the U.S. Department of Defense. The military is interested in high-resolution cameras as tools for aerial or land-based surveillance. If the Duke device can be shrunk to hand-held size, it could spark an alternative approach to photography. Instead of deciding where to focus a camera, a user would simply shoot a scene, then later zoom in on any part of the picture and view it in extreme detail. That means desirable or useful portions of a photo could be identified after the image was captured.