On the 8th of September 2016, I presented a paper I co-authored with colleagues from Utrecht University and Hellenic Open University. It was presented at the 8th International Conference on Games and Virtual Worlds for Serious Applications (VS-Games 2016). The conference took place at Barcelona, Spain, 7-9 September, 2016. 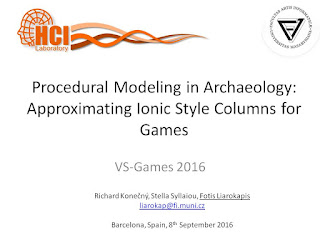 The paper was entitled ‘Procedural Modeling in Archaeology - Approximating Ionic Style Columns for Games’ and demonstrated how procedural modeling and computer graphics techniques can be combined for creating fast, accurate and realistic modeling of archaeological parts of buildings which can be used for games and virtual environments.