Gumstix has launched the 3G of its gumstick-shaped SBC (single-board computer) line. The tiny, Linux-friendly, PXA270-powered "Verdex" SBC offers 50 percent more processor speed and twice the memory of earlier models, and features an enhanced expansion bus, according to the company. In addition to its Marvell (formerly Intel) PXA270 (aka "Bulverde") processor, clocked at up to 600MHz, the new Verdex SBC integrates up to 128MB of RAM and 32MB of flash memory soldered onboard, the company said. Other enhancements over previous Gumstix SBCs include support for USB host interfaces, inputs for CCD (charge-coupled device) cameras, and better power management. Also available is an option for on-board Bluetooth, with a u.fl antenna connector, as shown on the Verdex XM4-bt board shown below. 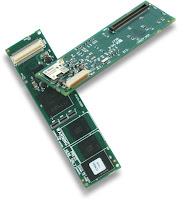 The Verdex maintains the 3.2 x 0.8 x 3.2-inch (80 x 20 x 8mm) of Gumstix's earlier SBC generations. In addition to matching the dimensions of its predecessors, the Verdex retains the 60-pin board-to-board connector of the first generation SBCs (now referred to as "Basix"), which should enable it to support existing 60-pin expansion cards; these include audio I/O, digital I/O, various microcontroller co-processors for robotics applications, and serial and USB expansion. The Verdex replaces the 92-pin I/O expansion connector introduced with the second-generation SBCs ("Connex"), however, with a pair of connectors. The combination of a 24-pin flex connector and separate 120-pin connector will support a range of new expansion boards, including much sought-after USB host ports. On the software side, the Verdex SBC comes preinstalled with the latest Linux 2.6 operating system as well as the open source U-Boot bootloader. Some of the potential applications include position-tracking applications. At Coventry University, we are developing a sensor-based mixed reality platform based on Gumstix technology.

The Sharp Zaurus SL-C3200 is the sixth generation of the groundbreaking SL-C line of LINUX-based PDAs. The internal 6 GB drive offers unparalleled storage and opens up new options--including using the Zaurus as a portable media player. The C3200 has both compact flash and SD slots. And, since the Zaurus's HDD is plug-n-play recognized by Windows, moving data is by USB 2.0 connection is fast and easy. Rather than running a somewhat limited PDA operating system, it runs Linux which means the CPU and RAM are the only real limit for running Linux applications. Linux apps must be recompiled to run on the Zaurus but that's not a daunting task, and we've seen many useful ports and open source software for the Z emerge over the years. In fact, there are several ROMs available for the Z as well. 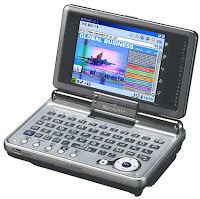 The Zaurus runs Lineo Linux with kernel 2.4.20 and Qtopia window manager. It includes a 3.7" VGA (640x480) screen including an optional VGA-out connection. There is also a built-in zoom function that allows zooming into the screen in five increments. Each step is larger than the previous, but none suffers any loss of quality. The screen's orientation automatically adjusts when swiveled. It's a very impressive design. Similar to the HTC Universal models, the swiveling screen transforms the shape of the Zaurus from PDA-style to laptop-style. Other technical specs include an Intel XScale PXA270 processor (416 MHz), 64mb RAM, and 128mb flash ROM. The two slots (1 CF, 1 SD) are I/O, so they support wireless connectivity (such as Bluetooth or Wi-Fi). There is a stereo-out for MP3 playback. The Zaurus SL-C3200 measures 4.9x3.4x1.0 inches (124x87x25mm), and weighs 0.65 pounds (298g). 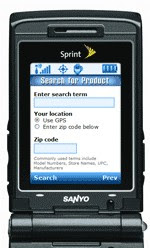 Users can then visualize important information about the product such as availability, price and promotional information, at the nearest locations. 85 million products are available at more than 30,000 retail stores across the United States. Slifter uses TeleAtlas map data and the location functionality is enabled by an ESRI middleware. It cost US$1.99 per month to Sprint subscribers (data consumption is not included).

Yesterday (11th July 2007), I presented an invited poster with title ‘Ubiquitous Mixed Reality for Urban Transport’ to an event organised by London Technology Network (LTN) at One St George Street, Westminster, London. The theme of the event was ‘Developing an Integrated Sustainable Transport System’ aiming at assessing the latest advancements in energy, materials and modelling for transport. An overview of the poster I presented is shown below, illustrating how ubiquitous mixed reality technologies can be used to assist companies and governmental organisations perform efficient urban transport planning and provide advanced services. 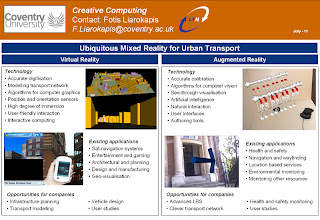 The use of global positioning technology in gaming is giving developers a new area to explore with Location Based Gaming (LBG). The toys use various technologies, including GPS, motion tracking, large-scale video projection and Bluetooth. The E911 directive and the rise in distribution of GPS-enabled handsets introduced the idea that location is the next big thing. Geo-caching, a real world treasure hunt and Pac-Manhattan, a real-world version of 1980's video game sensation Pac Man are the examples of a 'little' variation in the traditional gaming. Location Based Gaming is a means of playing a video game using technology like Global Positioning Satellites (GPS) that combines player's real world with a virtual world on the handset. The physical location becomes part of the game board allowing the player to interact with his/her physical environment. Players move through the city with handheld or wearable interfaces. Sensors capture information about the players’ current context, which the game uses to deliver an experience that change according to their locations and actions. In collaborative games, this information is transmitted to other players, on the streets or online.

LBG might include tracking a phone as it moves through a city during a treasure hunt, changing the weather in the game to match the weather in the players’ location, or monitoring players’ direction, velocity and acceleration during a high-intensity “fight”. The location technology also enables bonus features like challenging players close to one’s location for the ultimate fight or seeing comparative scores by vicinity. The net result is a game that interleaves a player’s everyday experience of the city with the extraordinary experience of a game. When Sony added GPS functionality to its flagship gaming console, PSP, it raised the bar for the designers. Nintendo, X box, Gizmondo and many others were quick to follow the suit. Now the gaming software developers are expected to come up with games that blur the edges between the virtual world and the real one. Of course, enabling global positioning technology will also materialize the idea of integrating standard navigation features and geo-tagging in gaming devices, but their survival will hugely depend on the ultimate gaming experience they are expected to deliver. Some of the most characteristic LBGs include: ‘Wall Street Fighter’, ‘Can You See Me Now?’, Swordfish and ‘Torpedo Bay’ and ‘Tourality’.

Wall Street Fighter - The latest from YDreams Wall Street Fighter, powered by KnowledgeWhere’s Location Application Platform (LAP), is a location-based game (LBG) where the world of business works as the backdrop for some fun fighting antics. The objective of the game is to make it to the top of the business food-chain by fighting everybody at the Bonds Office. The location based features include Location-based scenarios that change with your real location, multiplayer game that allows the player to challenge players close to his/her location for the ultimate fight and location-based rankings that show comparative scores by vicinity. The game was a finalist in the NAVTEQ LBS challenge under Entertainment & Leisure Applications category.

Can You See Me Now? - Performed by Blast Theory, a UK based adventurous artists groups using interactive media, Can You See Me Now? is an artistic performance in the form of a game in which online players are chased across a virtual city by three performers who were running through the actual city streets. The concept for CYSMN is a chase game, played online and on the streets. Blast Theory's players are dropped at random locations into a virtual map of a city. Tracked by satellites, professional runners appear online next to your player. The runners use handheld computers showing the positions of online players to guide them in the chase. Online players try to flee down the virtual streets, send messages and exchange tactics with other online players. If a runner gets within 5 metres of you, a sighting photo is taken and the game is over. Can You See Me Now? Won the Golden Nica for Interactive Arts at the 2003 Prix Ars Electronica and was nominated for a BAFTA Award in 2002.

Swordfish and Torpedo Bay - Blister, a wholly owned subsidiary of Canadian firm Knowledge Where Corp. published location-based game called Swordfish on the Bell Mobility network across Canada in July 2004 and later on Boost Mobile. To play Swordfish, a location-based fishing game, the player uses his/her mobile phone to find virtual fish and go fishing. Using Global Positioning Systems (GPS), Swordfish simulates a deep sea fishing experience on a mobile phone turning the player’s real world into a virtual ocean. The player has to move around to play this game. Using GPS technology in the mobile phone, the player's position is determined via a fish-finder so that the player can see where the nearest school of virtual fish is located in relation to his/her current position. The fish finder also features navigational assistance by providing the direction of the closest school of fish and an optional localized street map of your current location with virtual schools of fish. Also by Blister Torpedo Bay is a location-based naval battle game in which the player uses mobile phone to shoot various aircraft carriers, destroyers and submarines. The game uses Location Application Platform (LAP) that allows users from multiple carriers and multiple networks to interact within the same gaming environment. To tackle the problem of GPS and A-GPS signal fading Torpedo Bay implements predictive positioning algorithms that improve the accuracy and availability of GPS locates within problematic areas. Apart from that the game uses real map data to assist in the locating of enemy ships, weapons, and health.

Apple’s revolutionary iPhone™ went on sale in USA last Friday, June 29 at 6:00 p.m. local time at Apple® retail stores nationwide. iPhone is a revolutionary new mobile phone which introduces an entirely new user interface based on a revolutionary multi-touch display and pioneering new software. iPhone combines three products into one small and lightweight handheld device—a revolutionary mobile phone, a widescreen iPod®, and the Internet in your pocket with best-ever applications on a mobile phone for email, web browsing and maps. iPhone ushers in an era of software power and sophistication never before seen in a mobile device, which completely redefines what users can do on their mobile phones. 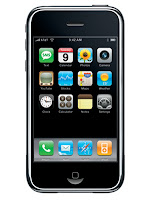 iPhone™ will run applications created with Web 2.0 Internet standards. Developers can create Web 2.0 applications which look and behave just like the applications built into iPhone, and which can seamlessly access iPhone’s services, including making a phone call, sending an email and displaying a location in Google Maps. Third-party applications created using Web 2.0 standards can extend iPhone’s capabilities without compromising its reliability or security. Web 2.0-based applications are being embraced by leading developers because they are far more interactive and responsive than traditional web applications, and can be easily distributed over the Internet and painlessly updated by simply changing the code on the developers’ own servers.