Brain Turns Words Into Complex Thoughts Like A Computer

Pink elephants serenading the world's tallest woman might be an improbable situation, but our brain is able to comprehend this thought. Humans can generate an infinite set of ideas from a finite set of words, but how the brain accomplishes this feat remains unclear. Now, a new study by US scientists suggests the human mind flexibly combines the meanings of individual words to compose structured thoughts. Researchers in the Department of Psychology at Harvard University, devised two experiments to identify regions in the brain that encode for meaning where the structure of the sentence is critical; and then how the brain represents this meaning. In the first experiment, 18 participants undergoing a functional MRI scan read simple sentences that could be conveyed in either the active or passive voice. These sentences could also be arranged to have mirror meanings: ‘the dog bit the man’ or ‘the man bit the dog’. 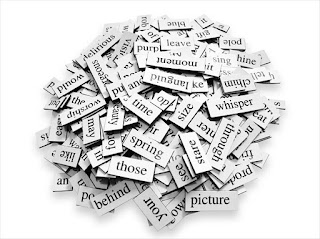 Through this they were able to identify that the left mid-superior temporal cortex in the brain plays a key role in decoding of sentence meaning and predicting the required response based on this information. In the second experiment, four nouns -- man, girl, dog, cat -- and five verbs (chased, blocked, approached, bumped and scratched) were used in various combinations to create sentences. For example the 34 participants would read sentences while undergoing fMRI such as ‘the dog chased the man’ and ‘the girl was scratched by the cat’. An analysis of the scans from this experiment show one distinct area of the left mid-superior temporal cortex is responsible for processing "Who did it?" (the agent) while a neighbouring separate region encoded for "To whom it was done?" (the patient). The researchers say the findings support long-held theories that the brain acts like a computer processing data.

The concept of walking on water might sound supernatural, but in fact it is a quite natural phenomenon. Many small living creatures leverage water's surface tension to maneuver themselves around. One of the most complex maneuvers, jumping on water, is achieved by a species of semi-aquatic insects called water striders that not only skim along water's surface but also generate enough upward thrust with their legs to launch themselves airborne from it.

An international team of scientists from Seoul National University, Korea (SNU), Harvard's Wyss Institute for Biologically Inspired Engineering, and the Harvard John A. Paulson School of Engineering and Applied Sciences, has unveiled a novel robotic insect that can jump off of water's surface. they have revealed new insights into the natural mechanics that allow water striders to jump from rigid ground or fluid water with the same amount of power and height.

A computer science team at The University of Texas at Austin has found that robots evolve more quickly and efficiently after a virtual mass extinction modeled after real-life disasters such as the one that killed off the dinosaurs. Beyond its implications for artificial intelligence, the research supports the idea that mass extinctions actually speed up evolution by unleashing new creativity in adaptations. Researchers found that, at least with robots, this is the case. For years, computer scientists have used computer algorithms inspired by evolution to train simulated robot brains, called neural networks, to improve at a task from one generation to the next. The UT Austin team's innovation in the latest research was in examining how mass destruction could aid in computational evolution. In computer simulations, they connected neural networks to simulated robotic legs with the goal of evolving a robot that could walk smoothly and stably. 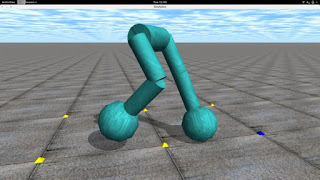 As with real evolution, random mutations were introduced through the computational evolution process. The scientists created many different niches so that a wide range of novel features and abilities would come about. After hundreds of generations, a wide range of robotic behaviors had evolved to fill these niches, many of which were not directly useful for walking. Then the researchers randomly killed off the robots in 90 percent of the niches, mimicking a mass extinction. After several such cycles of evolution and extinction, they discovered that the lineages that survived were the most evolvable and, therefore, had the greatest potential to produce new behaviors. Not only that, but overall, better solutions to the task of walking were evolved in simulations with mass extinctions, compared with simulations without them. Practical applications of the research could include the development of robots that can better overcome obstacles and human-like game agents.

A few weeks ago, I presented a paper I co-authored with colleagues from Coventry University. It was presented at the 19th International Conference on Information Visualisation (IV 2015). The conference took place at Barcelona, Spain, 21-24 July 2015. 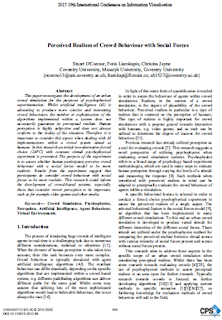 The paper was titled ‘Perceived Realism of Crowd Behaviour with Social Forces’ and investigates urban crowd simulation for the purposes of psychophysical experimentation. The purpose is to assess whether participants perceive crowd behaviour with a social forces model to be more realistic.

A draft version of the paper can be downloaded from here.
Labels: Articles, Artificial Intelligence, Gaming, Psychology

A few weeks ago, I presented a paper I co-authored with colleagues from the Universidade da Madeira, and Mezzo Movies Ltd. It was presented at the 19th International Conference on Information Visualisation (IV 2015). The conference took place at Barcelona, Spain, 21-24 July 2015. 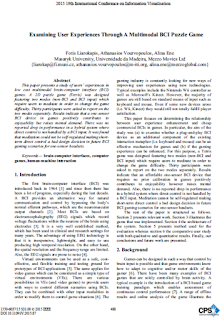 The paper was titled ‘Examining User Experiences Through A Multimodal BCI Puzzle’ and presents a study of users’ experiences in multimodal BCI games. A 2D puzzle game (Tetris) was designed featuring two modes (non-BCI and BCI input) which require users to meditate to change the game difficulty.