When Google introduced the Google Glass, one of the major objections was their appearance. Though technology has moved on, the aesthetics of augmented reality (AR) headwear is still a problem for many people. Microsoft is seeking to tackle this problem with its new prototype AR glasses. Unveiled with surprisingly little fanfare was a prototype of a new design of AR glasses that look much like an ordinary pair of black, thick-framed eye glasses. 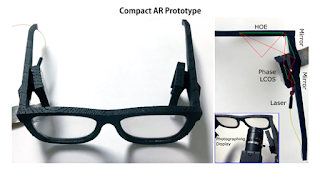 The prototype design is based on a technique called digital holography which is used in the prototype. The device may never be mass-produced as it is still an early prototype, and is lacking in several advanced features that are starting to become standard among AR and virtual reality (VR) devices, such as head tracking. Even so, the work on this prototype could form the basis of some new development in the field of wearable AR technology.

Microsoft owns the enterprise computing space. Windows-powered PCs run a huge portion of the global workforce. A few day ago, the company demonstrated how its Windows Mixed Reality initiative could potentially be used in that massive market. During the keynote address of its annual Build conference, Microsoft invited members of the Cirque du Soleil team up on stage. The members each donned a Microsoft HoloLens augmented reality headset and started showing the crowd how these products can be used in enterprise collaboration. 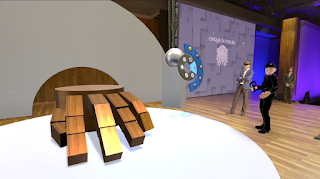 Together, the team appeared to devise and design a new stage layout for an upcoming production by summoning, altering and positioning simple assets from a menu. These objects could be moved freely by any of the members and all of them could see what was happening to their holographic layout in real time. All of this represents an impressive use case for how these headsets, both AR and VR, could be used in Microsoft’s all-important enterprise market.

Quantum Test Could Reveal Limits of our Mind

The boundary between mind and matter could be tested using a new twist on a well-known experiment in quantum physics. Over the past two decades, a type of experiment known as a Bell test has confirmed the weirdness of quantum mechanics – specifically the 'spooky action at a distance' that so bothered Einstein. Now, a theorist proposes a Bell test experiment using something unprecedented: human consciousness. If such an experiment showed deviations from quantum mechanics, it could provide the first hints that our minds are potentially immaterial. Spooky action at a distance was Einstein’s phrase for a quantum effect called entanglement. If two particles are entangled, then measuring the state of one particle seems to instantly influence the state of the other, even if they are light years apart. But any signal passing between them would have to travel faster than the speed of light, breaking the cosmic speed limit. To Einstein, this implied that quantum theory was incomplete, and that there was a deeper theory that could explain the particles’ behaviour without resorting to weird instantaneous influence. 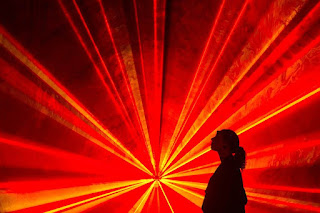 Nowadays, researchers proposed an experiment in which A and B are set 100 kilometres apart. At each end, about 100 humans are hooked up to EEG headsets that can read their brain activity. These signals are then used to switch the settings on the measuring device at each location. The idea is to perform an extremely large number of measurements at A and B and extract the small fraction in which the EEG signals caused changes to the settings at A and B after the particles departed their original position but before they arrived and were measured. If the amount of correlation between these measurements doesn’t tally with previous Bell tests, it implies a violation of quantum theory, hinting that the measurements at A and B are being controlled by processes outside the purview of standard physics. Such a finding would stir up debate about the existence of free will. It could be that even if physics dictated the material world, the human mind not being made of that same matter would mean that we could overcome physics with free will.

On the 17th May 2017, at the Google I/O keynote presentation Vice President of Virtual Reality for Google, shared a number of new initiatives in virtual and augmented reality. This included new services for the Tango platform called visual positioning service, or VPS. The Tango team worked with the Google Maps team to develop the service, which allows devices to triangulate location based on observed visual features. 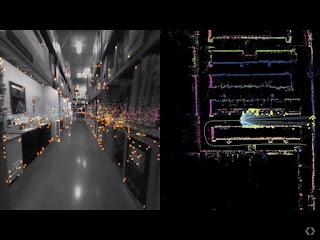 It is obvious that AR is most powerful when it's tightly coupled to the real world, and the more precisely, the better. With VPS, Tango devices compare feature points against previously observed points, allowing customers to find exact items in the store. In addition, the potential to use VPS to map environments for visually-impaired users seems to be great. Moreover, the app uses Tango's sensors to map a classroom and place 3D visualizations within the space for students to explore.

On the 26th April 2017, I was part of a panel session for a paper I co-authored at the Education Program of the 38th Annual Conference of the European Association for Computer (Eurographics 2017). The conference took place at Lyon, France, 24-28 April 2017. The panel paper was entitled ‘The New CGEMS - Preparing the Computer Graphics Educational Materials Source to Meet the Needs of Educators’. 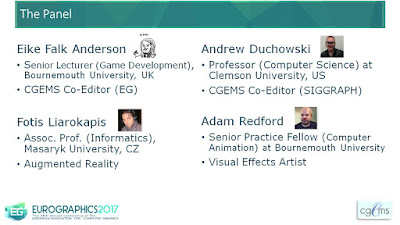 The aim of this panel was to provide the audience with an idea of the purpose of CGEMS – a source of educational materials for educators by educators – and to give them an opportunity to contribute their views and ideas towards shaping the new CGEMS. Towards this purpose, a number of issues to resolve were identified, which the panel forwarded to the participants of the forum for discussion.