The most important set of genetic instructions we all get comes from our DNA, passed down through generations. But the environment we live in can make genetic changes, too. Last year, researchers discovered that these kinds of environmental genetic changes can be passed down for a whopping 14 generations in an animal – the largest span ever observed in a creature, in this case being a dynasty of C. elegans nematodes (roundworms). To study how long the environment can leave a mark on genetic expression, a team led by scientists from the European Molecular Biology Organisation (EMBO) in Spain took genetically engineered nematode worms that carry a transgene for a fluorescent protein. When activated, this gene made the worms glow under ultraviolet light. Then, they switched things up for the nematodes by changing the temperature of their containers. When the team kept nematodes at 20° Celsius (68° F), they measured low activity of the transgene - which meant the worms hardly glowed at all.

But by moving the worms to a warmer climate of 25° C (77° F), they suddenly lit up like little wormy Christmas trees, which meant the fluorescence gene had become much more active. Their tropical vacation didn't last long, however. The worms were moved back to cooler temperatures to see what would happen to the activity of the fluorescence gene. Surprisingly, they continued to glow brightly, suggesting they were retaining an 'environmental memory' of the warmer climate – and that the transgene was still highly active. Furthermore, that memory was passed onto their offspring for seven brightly-glowing generations, none of whom had experienced the warmer temperatures. The baby worms inherited this epigenetic change through both eggs and sperm. The team pushed the results even further - when they kept five generations of nematodes at 25° C (77° F) and then banished their offspring to colder temperatures, the worms continued to have higher transgene activity for an unprecedented 14 generations.

Leap Motion, the company behind the hand-tracking depth sensor, recently tweeted out another through-the-headset view of a prototype UI, this time centered on how some simple elements might work in the augmented office of the near future. Using the company’s prototype dev kit, dubbed Project North Star, Leap Motion keeps the user interface fairly muted until it’s needed, the company shows how a minimized AR element like an event reminder could hide in plain sight. 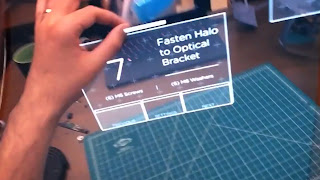 By moving your hand closer to the small white bar, which is projected to appear on the edge of a desk, you can produce a 2D window, pick it up, place it in mid-air, and even lay it down flat on a desk. Notably, the windows appear to have a weightiness about them that make them appear more natural in the environment. First revealed earlier this month, the Project North Star AR headset boasts a 100 degree field of view, low latency, and high-resolution.

Electrodes implanted in the brain and spine have helped paralyzed monkeys walk. The neurologists behind the study reported that the implants restored function in the primates’ legs almost instantaneously. The spinal cord of the subject monkey was partially cut, so the legs had no way of communicating with the brain. To mend the brain-spine interface, electrodes were placed on key parts of the monkey’s body. Implants were placed inside the monkey’s brain at the part that controls leg movement, together with a wireless transmitter sitting outside the skull. Electrodes were also placed along the spinal cord, below the injury. A computer program decoded brain signals indicative of leg movement and transmitted the signals to the electrodes in the spine. Within just a few seconds, the monkey was moving its leg. In a few days, it was walking on a treadmill.

This study is a massive breakthrough—it’s the first time implants have helped a primate walk. There has been much research to develop tech for paralyzed patients, but most lab trials were done on rodents. The results were astoundingly positive, but the researchers say that it will take at least a decade to fine-tune the technology for use in humans. Still, our bodies are greatly similar to that of monkeys, and the researchers believe transition could be quick. Exciting news about the study is that the components that the researchers used are legal for human use in Switzerland. The Swiss group of the study have started clinical trial with eight people with partial leg paralysis. We’re all eager for further development in the study—an innovation that could greatly change the lives of approximately 282,000 people in the U.S. with spinal cord injuries.

Researchers at The Human Computer Interaction Lab at Hasso-Plattner-Institut in Potsdam, Germany, proposed a novel solution to the problem of wearable haptics for augmented reality. Using a lightweight, mobile electrical muscle stimulation (EMS) device that provides low-voltage to arm muscles, the idea is to let AR headset-users stay hands-free, but also be able to experience force-feedback when interacting with virtual objects, and feel extra forces when touching physical objects in their environment too. Using a HoloLens headset, researchers show their proposed solution in action, which is made up of a backpack, a laptop computer running Unity, a battery-powered EMS machine, electrode pads, and visual markers to better track hand gestures. The researchers say their system adds physical forces while keeping the users’ hands free to interact unencumbered. The EMS-based system actuates the user’s wrists, biceps, triceps and shoulder muscles with a low-voltage to simulate a sort of ‘virtual pressure’. This perceived pressure can be activated when you interact with virtual objects such as buttons, and even physical objects like real-world dials and levels to create an extra sense of force on the user’s arms. 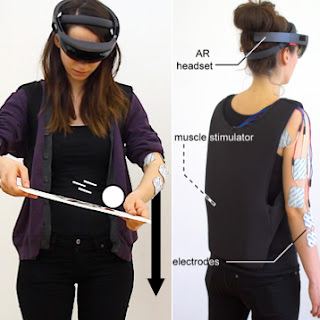 There are some trade-offs when using this sort of system though, making it somewhat less practical for long-term use as it’s configured now. Two of the biggest drawbacks: it requires precise electrode placement and per-user calibration before each use, and it can also cause muscle fatigue, which would render it less useful and probably less comfortable. But maybe a little muscle stimulation can go a long way. The paper discusses using EMS sparingly, playing on the user’s keen sense for plausibility while in a physical (and not virtual) environment. It’s an interesting step that could prove effective in a multi-pronged approach to adding haptics to AR wearables, the users of which would want to stay hands-free when going about their daily lives. Actuator-based gloves and vests have been a low-hanging fruit so far, and are quickly becoming a standard go-to for VR haptics, but still seem too much of a stretch for daily AR use. Force-feedback exoskeletons, which stop physical movements, are much bulkier and are even more of a stretch currently. There’s no telling what the prevailing AR wearable will be in the future, but whatever it is, it’s going to have to be both light and useful—two aspects EMS seems to nail fairly well out of the gate.

Infinadeck is the world’s first commercially-viable omnidirectional treadmill.  This patented product allows users to naturally walk in any direction and, when paired with a VR headset, creates a personal holodeck experience that will allow you to take a stroll through vast, immersive new worlds. 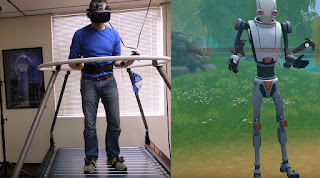 The treads on the bottom move in both an x and y-axis giving you the sensation of moving around freely. You will have the ability to move in 360 while being tracked with the Vive Tracker. The sensors determine where you are in the virtual world and can recreate your physical height through it.