The main issue with the Microsoft HoloLens is its limited field of view, dictated by the physics of the technology used. Microsoft writes that to enable the use of internal reflection in the waveguide they are forced to limit themselves to a range of exit angles of around 35 degrees, which dictates the subsequent field of view of the hologram as seen by the user. 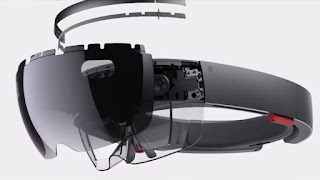 They have however developed a clever technique to get around this limitation, by splitting the image sent down the waveguide into two elements, which then has 2 separate exits, and while each will be limited to 35 degrees, the subsequent final image seen by the user can span up to 70 degrees. They demonstrated the technology in actual hardware and that the solution is more than theoretical.

Google to bring its ARCore platform to Galaxy devices thanks to AR deal with Samsung. Samsung has revealed that it has partnered Google, in order to bring its ARCore platform to Galaxy devices. The fact that the ARCore framework will be available on Samsung mobile devices is a large step forward in pushing AR into the wider consumer market. Samsung of course already competes heavily in the virtual reality environment with its Samsung Gear VR headsets. Samsung said the partnership deal with Google will allow it to deliver the promise of AR” to its mobile users. 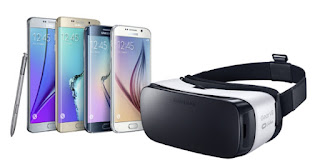 Samsung pointed to the dual-pixel sensors and advanced optics of its cameras, and said that by adding machine learning and computer vision to the equation, it could transform the camera into a means of comprehending and contextualising the world quickly and accurately recognising the people, places and things in front of them. Samsung, like other tech firms such as Apple and Microsoft, believe that augmented reality will make a powerful impact on the consumer market, and will deliver to users a powerful new experience in their daily lives.

While Apple has had plenty of success in consumer hardware, it has stayed away from 3D printing. Aside from one patent application in 2014 focused on printing multi-colored 3D objects, and another for a rapid prototyping technique using liquid metals, Apple hasn’t made any noteworthy plays in the space. But a newly secured patent could be used to make 3D printing a piece of Apple’s augmented reality initiative: The technology giant recently acquired a patent (US 9,776,364) for an AR-compatible 3D printing system. 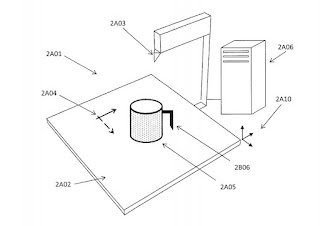 The patented technology plugs a gap in current 3D printing techniques: Existing methods have provided no solution for new objects or materials to be 3D-printed onto existing or unfinished objects. For example, printing a new handle onto an existing cup. The new Apple patent uses visuals – either from cameras or augmented reality systems – to understand the pose and alignment necessary to 3D-print materials onto an existing item, creating what the patent calls called a “composed object.” The technology could integrate ARKit-developed apps with 3D printing technology.

Nintendo has come up with some brilliant products in the past that reminded us the power of imagination, creativity, and innovation. One of those items was the Nintendo Power Gloves that allowed users to play games in a futuristic sense. The Power Glove allowed you to play 2D games with this unique motion-sensor controller. It was first released in 1989 that came equipped with 8 bits of power and 2 transmitters that allowed you to play games such as Rad Racer. Now, with some clever engineering, you can use the Power Glove on the modern VR platform.

Some creative minds at Teague Labs were able to re-utilize the glove using the HTC Vive tracker to bring it into the 3D world. They were easily able to use hand gestures with the available data. They rigged up a hand model to respond to the sensor data of the Power Glove and worked pretty easily. Teague Labs were also able to create a demo based on the original Power Glove Branding where you can shoot lightning by making a fist. One of the benefits of using the Power Glove on an HTC Vive is that users can simulate more natural interactions.

On the 06th of October 2017, there was the demonstration of Researchers' Night with topic 'mobility'. There were many visitors, exploring science whilst having fun and experiencing novel research methods in different areas of HCI. 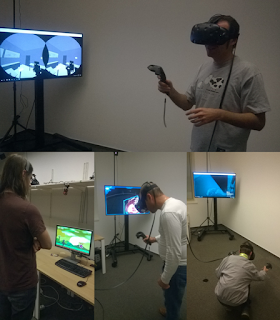 The HCI Lab has presented a number of interesting demos, covering areas of immersive virtual reality, brain-computer interfaces, motion capturing and 3D printing.  More than 250 people have experienced our demos.