A new highly maneuverable search and rescue robot that can creep, crawl and climb over rough terrain and through tight spaces has been developed by Ben-Gurion University of the Negev (BGU) researchers. The new Rising Sprawl-Tuned Autonomous Robot (RSTAR) utilizes adjustable sprawling wheel legs attached to a body that can move independently and reposition itself to run on flat surfaces, climb over large obstacles and up closely-spaced walls, and crawl through a tunnel, pipe or narrow gaps. 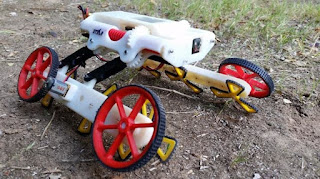 The robot uses its round wheels to travel more than three feet per second on hard flat surfaces and switches to spoke wheels to traverse extremely soft or granular surfaces, like thick mud or sand, without getting stuck. It also climbs vertically and crawls horizontally by pressing its wheels to walls without touching the floor. The team is working on a larger STAR robot version that will climb over larger obstacles. A smaller STAR or RSTAR will piggyback on the larger robot to use in hard-to-reach areas and sneak in between narrow cracks and passages.

Cornell University researchers have developed a prototype of a robot that can express emotions through changes in its outer surface. The robot's skin covers a grid of texture units whose shapes change based on the robot's feelings. Their design features an array of two shapes, goosebumps and spikes, which map to different emotional states. 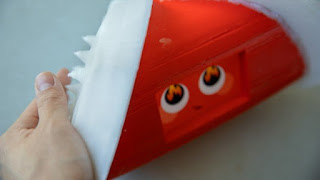 The actuation units for both shapes are integrated into texture modules, with fluidic chambers connecting bumps of the same kind. The team tried two different actuation control systems, with minimizing size and noise level a driving factor in both designs. Future challenges include scaling the technology to fit into a self-contained robot.

The third issue of the iMARECULTURE newsletter was recently published and presents an overview of the progress done over the past six-month period. The main efforts were focused in application development and pilot tests. After gathering almost all necessary information and data, pilot applications of VR immersive visits to submerged cultural heritage and initial evaluation helps establishing common grounds among our interdisciplinary group and cooperate to improve and build upon the initial concept. 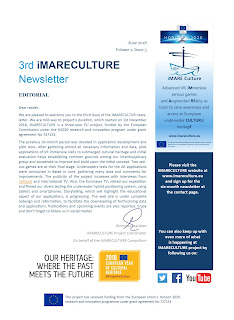 Two serious games are at their final stage. Underwaters tests for the AR applications were conducted in Baiae in June, gathering many data and comments for improvements. The publicity of the project increases with interviews from national and international TV. Also, the Euronews TV, visited our expedition and filmed our divers testing the underwater hybrid positioning system, using tablets and smartphones. Storytelling, which will highlight the educational aspect of our applications, is progressing.