The subcortical areas of the brain, situated in its deepest reaches, remain a mystery. Scientists are aware of the critical role they play in motor, emotional and associative activity but do not know precisely how they work. A number of serious diseases are directly linked to these areas, including Parkinson’s, Tourette syndrome and obsessive-compulsive disorders (OCD). Existing treatments for regulating and measuring the activity of the subcortical areas are highly invasive, and sometimes work without us really knowing how. Researchers from the University of Geneva (UNIGE), Switzerland, and Cologne University (Germany) decided to see whether a non-invasive method – electroencephalography (EEG) – could be employed in tandem with mathematical algorithms to measure this brain activity externally. They proved for the first time that this technique is able to record signals usually only seen by implanting electrodes in the brain. 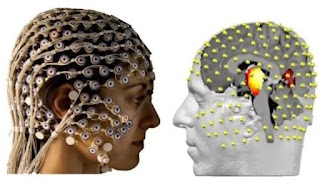 Current treatments, based on deep brain stimulation are highly invasive: implanting electrodes into the centre of the brain, which are stimulated electrically by an external stimulator. Although this technique has been shown to be effective in Parkinson’s, unfortunately it doesn’t work so well for OCD and Tourette syndrome. Since implanting electrodes is an extremely invasive technique, another method was called for to increase the number of subjects studied. Researchers were able to measure and record the electrical activity of the subcortical areas of four OCD and Tourette’s patients who had been given electrode implants. At the same time, these individuals were equipped with an EEG as the scientists measured the activity of the same areas from the surface. The mathematical algorithms that they developed meant that they could accurately interpret the data provided by the EEG and ascertain where the brain activity was coming from.