Researchers from the University of Cincinnati examined the potential bio-fluids to test human health with tiny, portable sensors. They developed wearable technology by creating the world's first continuous-testing device that samples sweat as effectively as blood but in a non-invasive way and over many hours. Remarkably, many of the innovations in the field of biosensors and sweat technology were developed in Cincinnati (i.e. the first glucose monitor for diabetes). 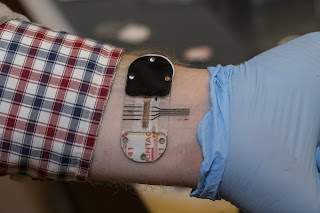 Now researchers identified four waves of discovery when it comes to testing human health. First, doctors began drawing and shipping blood to labs in an invasive, time-consuming and labor-intensive process that patients still undergo today. After examining the use of saliva, tears and interstitial fluid, they concluded that sweat holds the most promise for non-invasive testing because it provides similar information as blood and its secretion rate can be controlled and measured.